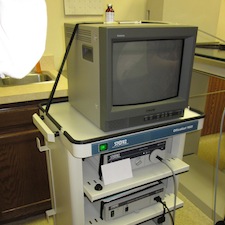 AI techniques used at our practice include vaginal insemination via pipette, transcervical insemination (TCI) using an endoscope, and surgical insemination. We like to choose a technique which maximizes the probability of pregnancy, while minimizing risk to the bitch and cost to the client. All three techniques are ideally used with proper ovulation timing.

The “art” of ovulation timing comes in dealing with deviations from the textbook case. For example, we have followed cycles with 10 days between an apparent initial rise and ovulation (the actual initial rise may be 1.5 or it may be as high as 3.5 or 4.0). We have also followed cycles with only 72 hours between the initial rise and the end of the fertile period (progesterone can go from 2.5 to 25 in 3 days, for instance). Knowing the date of the initial rise, watching for a particular range of progesterone values (based on type of semen and number of inseminations), and vaginoscopy are all factors we look at in deciding the best day(s) on which to inseminate your bitch.

Font Resize
Contrast
Accessibility by WAH
Call Us Text Us