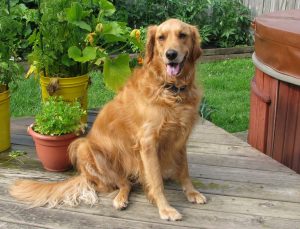 When we freeze semen in liquid nitrogen, we are asking the sperm cells to survive a drop in temperature from 37 C to 4 C during the chilling process, followed by a plunge to –196 C during the freezing process. Luckily, canine semen is less sensitive than many other species. We must be meticulous, but we do not require ‘100% clean rooms’ or other high-priced technological aids. Once frozen, semen can be stored indefinitely.

Special extenders are designed to protect the sperm cells during freezing. Glycerol, a cryoprotective agent, is allowed to penetrate the cells after chilling. Buffering compounds maintain an optimum pH of 6.9-7.1 despite hydrogen ion production by sperm metabolic activity (tends to increase the pH). Antibiotics are added to prevent bacterial growth, sugars are included to provide energy, and fresh egg yolk is used to protect cell membranes from cold shock.

The rate of freezing should be fast enough to prevent excessive shrinkage of sperm cells as fluid leaves them (changing osmotic gradient), but slow enough to prevent ice from forming inside the cells. When frozen semen is thawed, the optimal rate is fast enough to prevent ice crystal formation, but slow enough to prevent cells from rupturing as fluid re-enters. We work with Minitube products and technology. This progressive company has been processing 95% of the world’s porcine (pig) semen for years, and they are now applying their expertise to canine reproductive techniques. Using Minitube’s methodology and equipment, we can approach a 70% return of sperm motility on thawing of frozen semen. For example, if a sample has 80% motility pre-freezing, then we can get 56% progressive motility post-thaw.

Semen to be frozen is stored in straws. We collect the male, do a semen evaluation, and process the semen to allow about 50 million sperm per straw. The number of straws produced depends on the total number of sperm per ejaculate. The number of straws needed for breeding depends on the quality of the semen (motility and morphology). We need 100 million normal, motile sperm per breeding. The number of breedings possible when using a frozen sample depends on the semen evaluation and the dog’s individual sensitivity to the freezing process. In other words, some dogs freeze very well and give 70% return on motility plus minimal defects post-thaw. Some dogs’ semen may not perform as well, meaning more straws per breeding. Most collections yield between one and five breedings. A tester straw (the last, partially full one) is always thawed and checked in order to make the needed calculations.

Font Resize
Contrast
Accessibility by WAH
Call Us Text Us